April 18, 2018April 20, 2018
Recently, a friend brought to my attention a blog post on the AfroPunk website because it discusses health and because it used a photo taken by the incomparable Saadi Khali as part of a discussion on the way we view bodies that are considered fat (I’m careful with my language here because I have a hard time using the word ‘fat’ to describe a person who does not describe themselves that way. Similarly, I don’t like being called ‘skinny’, though I am often described as such), especially when the body belongs to a woman. Khaali’s work aims to use photography as a means to restore Black love and Black beauty. For me, his work captures both the vulnerabilty and the power that is inherent in every human body in way that feels authentic. I have followed his work for years. 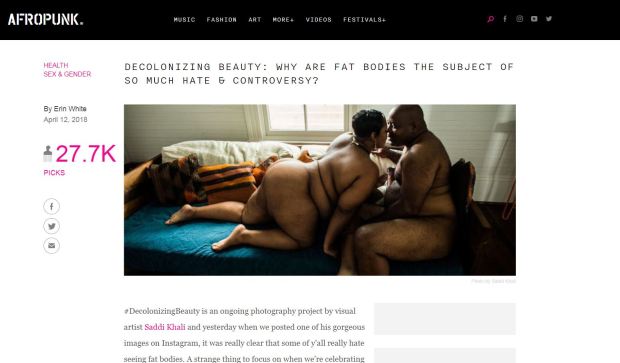 So, I was a bit annoyed at many of the comments about the featured image used in the article. Specifically, I was annoyed because some the comments echoed similar conversations I’ve come across on the interwebs that 1) the tend to focus on a persons weight as something the each individual alone, has control over and 2) they tend to focus on a person’s weight as the sum total of their overall health (as well as the sum total of their humanity – but I hope I don’t need to talk about why that makes no sense and is simly not acceptable over here). So, for all the people out there who are living under these misguided (albeit understandable given our cultures fascination with policing other people’s bodies, especially the Black bodies and the ones we believe house uteri) beliefs, I ask that you consider the following:
Her weight isn’t just a matter of her lifestyle behaviors (eating well, working out, etc).
A person’s weight is socially determined. In short, this means that a woman’s health is determined by how factors like the city she was born in, where she works, her income, her level of education, her race/ethnicity, etc. all interact to determine the status of her health, including her weight. A woman’s health status, including the size of her waistline, is determined by much more than what she eats and how often she works out. If that were only a matter of those two things, you would not see entire segments of the population, even those who eat well and are physically active, being at what is considered to to an unhealthty weight. We only need to look to the inimitable Oprah Winfrey to know that weight, indeed almost every health status, is not that simple.
Of course self-care is important. I personally hold the belief that self-care is essential because it helps maintain harmony between the things a woman has control over and the things she does not. But, it’s important that if we are going to have a conversation about bodies, especiall the bodies of Black women, we have to be honest about the fact there are many, many factors acting upon her body, that affect her health and her weight that she does not have control over. Can we say race and racism?!  The literature on the effects of race and racism on the body is so expansive that it will suffice to say that if we are really concerned about size and weight as it relates to health, particularly for Black women, we really should have some honest and frequent conversations about race and racism. To that end, I suggest that the next time any of us decides to comment on the size of a woman’s body, particularly a Black woman’s size, for health reasons or any other reasons, ask yourself when was the last time we allied with her to mitigate or resist any form of oppression she undoubetedly experiences on a daily basis. If we can’t remember, then let’s do ourselves a favor and just keep quiet about folks’ body’s. I promise it will work out better that way. 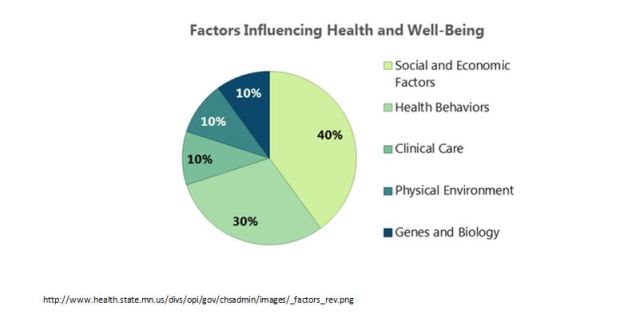 Her weight impacts her overall health. It is not the sum total of her health.
We know that losing or gaining even 10% our body weight can have an impact on our health. Think about it. Have you ever tried to lose or gain 5-10 pounds? It’s not easy. You body will resist the change and even after you achieve your goal, maintaining it is a different story entirely. Every woman who has ever tried her change her weight knows this is true. That’s partly because the body is designed to maintain homeostasis. Every woman who has ever tried to change her weight will also tell you that a change in weight does not necessarily mean that she is better off any other area of her life tht impact her health. Issues like imposter syndrome at work or school, body acceptance, social stress, financial stability, family issues and other chronic illnesses may all still be present, and therbye affecting her health, regardless of her weight. You can probably name any number of women who lost weight but still struggled with mental health, emotional health, or spiritual health. So, in regards to the feature image in the Afropunk piece, I prefer to highlight the ways the woman centered in the photo showed an admirable level of courage, vulnerabilty, and power that truthfully, when I get my photos take by Saadi Khali, I doubt I’d be beave enough to show the whole entire world.
Finally, to quote @thedopeplesoul, one of the more purposeful comments on an instagram post intended to highlight the work Saadi Khali does to capture the beauty of all black bodies, especially Black folk in love, ‘Black love is so beautiful.’

Healthier Futures is a collaborative with a single intention: to empower women to live healthier lives through wellness and self-care. View all posts by healthierfutures

2 thoughts on “Here’s the Truth About Her Weight”

#CiteASista™ began as the brainchild of two University students seeking to transfer theory to practice. What began as once monthly twitter chats has since turned into a community and a movement.

Brittany Williams and Joan Collier utilize Cite A Sista™ and #CiteASista™ for commercial and non-commercial purposes. Our use of this brand and closely related titles are documented to establish "common law" usage rights.